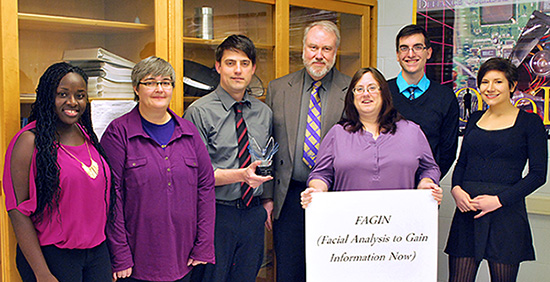 DEFIANCE, Ohio – The Defiance College chapter of “Free the Slaves” was awarded the Ohio Liberator of the Year award on the evening of Jan. 17 at the Ohio Liberator Awards ceremony. The award highlights and acknowledges work against human trafficking.

The ceremony was held in Columbus with the Ohio Liberator Awards being sponsored by Save Our Adolescents from Prostitution (SOAP). SOAP was founded by Theresa Flores, a survivor of human trafficking in her teens who regularly advises Ohio Governor John Kasich, Attorney General Mike DeWine, and US Senator Rob Portman.

While the student group had been nominated, they were not shown as finalists and their award was a surprise announced near the end of the ceremony through a short online parody film titled “Mission: Unlikely.” The honor of Ohio Liberator of the Year was given for the work done on FAGIN (Facial Analysis to Gain Information Now), which is a proof of concept program to help identify and locate children being sold online for sex. 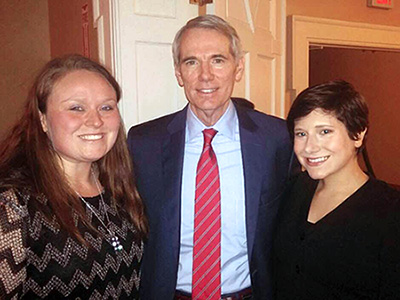 Ashley Wilson, one of the programmers for FAGIN, commented that the FAGIN project was one of the reasons she elected to transfer to Defiance College. “I thought it was really cool, and I wanted to help as much as I could,” said Wilson. ”It was the sort of project I had always wanted to be involved with: using software for the greater good. I ended up getting involved in the anti-human trafficking efforts of ‘Free the Slaves’ here at DC because of FAGIN, so the project really means a lot to me.”

Senator Portman was present to congratulate DC students when they received their award. In 2015, Portman championed two bills to combat human trafficking and was interested in the FAGIN proof of concept program presented by Defiance College. Both Senator Portman and Governor Kasich are previous liberator award recipients.

Defiance College, chartered in 1850, is an independent, liberal arts institution in Northwest Ohio offering more than 40 undergraduate programs of study as well as graduate programs in education and business. Defiance College has received national recognition for its educational experience of service and engagement. The college website is www.defiance.edu.