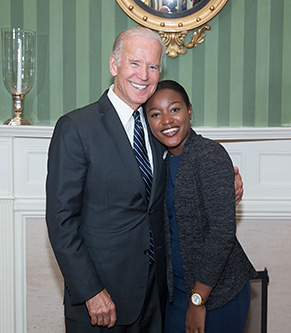 DEFIANCE, Ohio - As a member of a national student advisory committee to create change on college campuses to fight sexual assault, Defiance College junior Denique Dennis had the opportunity earlier this month to attend a reception hosted by Vice President Joe Biden in his residence at the Naval Observatory in Washington, D.C.

Dennis, a social work major, was selected in June as one of 28 students from across the country to serve on the advisory committee for It’s on Us, a movement created in 2014 by President Obama and Vice President Biden to challenge students to take the lead on their campuses and mobilize peers to create cultural and systemic changes against sexual violence. In 2015, the It’s On Us Student Advisory Committee was created to further empower young people to step up and to be a part of the solution.

The reception at the Vice President’s residence included lawmakers as well as three individuals recognized with Bystander Courage Awards for actively preventing an assault from occurring.

Prior to the reception, Dennis attended a meeting at the White House where she met the It’s On Us council, and the group discussed various awareness events taking place on campuses across the country.

Dennis became interested in the It’s on Us campaign during her freshman year. This summer, she received word that she was selected to serve on the national student advisory committee. “Our job is to mobilize students, to host events, and bring awareness on campus. My job includes a lot of calling and offering resources to host events,” she says. Much of the committee’s work is accomplished via conference calls.

She says changing the culture of sexual violence on campuses involves changing a mindset. She sees her life going forward as one of advocacy enhanced by her studies in social work. “I have an agenda of female empowerment and to help children of broken homes.”

Her trip to Washington, D.C. and visits to the White House and Vice President’s residence gave Dennis the chance to meet with like-minded students. “I felt empowered listening to student leaders speak,” she says.

At Biden’s reception, Dennis was able to speak with a wide variety of individuals including leaders of shelters, survivors of assault, advocates, and “people who are speaking out and trying to change the culture.”

Biden addressed the group, thanking them for their efforts. “I was just really proud to hear someone in a place of power, who isn’t a woman, give such a speech,” Dennis says.

Biden spoke with her one-on-one and thanked her for her efforts. Dennis, a native of Jamaica, is the only student from an Ohio college or university serving on the It’s on Us committee.

Defiance College, chartered in 1850, is an independent, liberal arts institution in Northwest Ohio offering more than 40 undergraduate programs of study as well as graduate programs in education and business. Defiance College has received national recognition for its educational experience of service and engagement. The college website is www.defiance.edu.